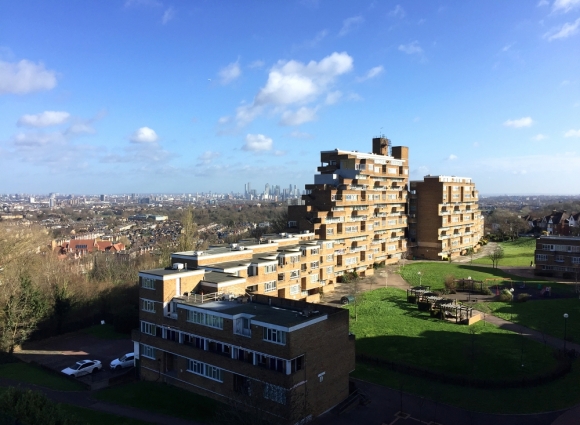 You can’t fail to spot Dawson’s Heights if you’re in South London. It sits on an exposed outcrop on Dawson’s Hill to the east of Dulwich and south of Peckham. Anyone who has looked at it from Denmark Hill surely has seen the way in which it sit proudly on the skyline. It was designed by Kate Macintosh when she was working for the London Borough of Southwark’s in-house architecture department, and was built between 1964 and 1972. She was 26 at the time!

As a proud south London resident, I’ve been a big fan of the building for many years and was thrilled when a few years ago a friend bought a flat there from one of the original owners. They’ve recently completed refurbishing their flat and welcomed us in one morning to view their flat and the wider estate. 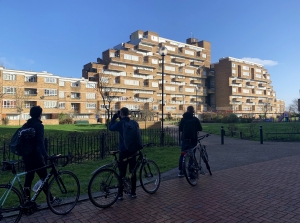 James gave us a tour of their flat, explaining how the three bed flats dovetail into each other in plan and section. He showed how access works from the deck and also the small area of green space they have access to. The levels of 3 bedroom homes are then separated by layers of 1 beds. He explained more about the development and its history along with the number of homes that remain as social rent (around 75%). He also spoke about how popular the flats are with Architects and designers. Due to the relative lack of transport links, the values are also kept quite low. 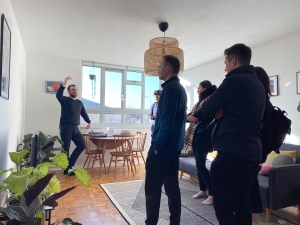 Following a good look around the flat, we were shown around the walkways and terraces by James who described how the flats were accessed and serviced. What worked well and what didn’t. We were then able to get access to some of the higher level terraces with fantastic panoramic views over both central London and Crystal Palace. 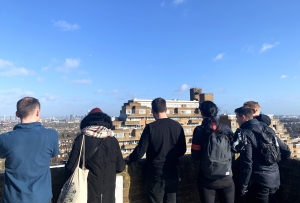 Each year we go to their flat and celebrate the New Year on one of the incredible roof terraces and it was nice to be up here again in the daylight. 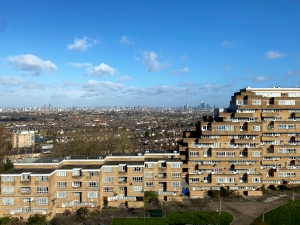 We further explored the gallery access and then worked our way back to the central courtyard. A few of the group explored the nature reserve to the north before getting the bus back to the studio with the rest heading back via bike. Thanks again to James and Hannah for letting us view their incredible flat and sharing in some of the Dawson’s Heights story.